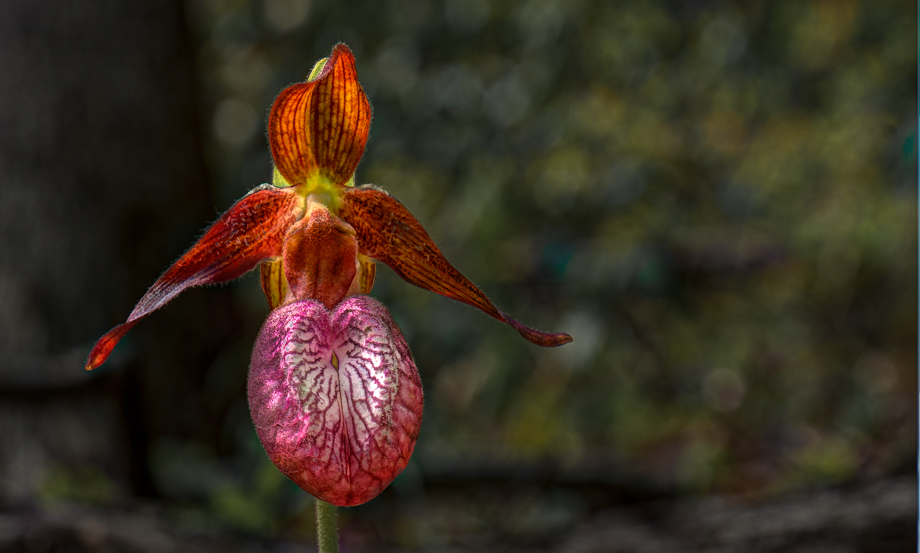 Herein I fulfill my promise of an image of a Pink Lady’s Slipper. I mentioned earlier that this plant lives in close association with a fungus. In particular the tiny Slipper embryos are released from their protective seed coats as a result of the interventions of the fungus. Moreover seedlings are dependent upon fungal hyphae for nourishment during their earliest stages of development. Once the plant is established nourishment of the fungus is partially derived from tissues of the orchid. When individuals belonging to different species live in close association in this way we say that they live symbiotically. Perhaps you are familiar with terms which describe different sorts of symbiotic relationships? We say that a relationship is commensal when one organism benefits from the association and the other is neither benefited nor harmed. Two organisms benefit equally when they participate in a mutualistic relationship. And one organism benefits at a significant cost to the other when it, the benefactor, acts as a parasite. Beyond the rhetorical value of discussing these differences I write to consider the relationship between our own species, Homo sapiens, and the planet with which we live, symbiotically. Consider that the Gaia Hypothesis states that the Earth is a complex, self-contained, selfsustaining, and self-perpetuating super-organism. Although I do not think of the Earth in this way I do believe it is reasonable to think of the planet as a complex system made up of innumerable interacting parts. Humans are one of these parts and I wonder about the nature of our relationship with the planet. I believe the ecological role played by our distant ancestors may have been similar to that of most other mammalian omnivores – they took, treaded lightly, and did little to disrupt the ecosystems of which they were part. We were commensal symbionts – benefitting while doing no harm. But there has been something about the combination of upright posture,  opposable thumbs, and an out-sized brain – Homo sapiens is different. And, now, countless generations later we have harnessed the energy of the atom, unraveled the genetic code, and have the capacity to gaze into deep space. At what cost? And has the nature of our symbiotic relationship with the earth changed? I now quote from another earlier post. ” … take a look at this figure. At current rates of consumption, Homo sapiens is using the resources of the planet at a rate of 1.5 Earths each year. A sustainable rate of consumption is one at which the Earth is able to replace resources as rapidly as they are used (1.0 Earths per year) – like a mouse on an exercise wheel. We have currently overshot this rate by 50%. The bad news is that this rate of consumption is increasing and is predicted to reach 2.0 Earths by 2030, and 3.0 Earths by mid-century.” To see the influence of such unbridled growth and consumption take a look at this recently released series of time-lapse video images. Given that we have been and are taking more than we have been giving back I must conclude that contemporary humans are parasites. A very poorly adapted parasite kills its host, its source of nourishment and support. Homo sapiens, as its name implies, isn’t stupid and will not be the downfall of the planet upon which it relies but will perhaps be capable of striking a balance between its own reproductive output and the debilitation of its host. This planet had been around for more than four billion years before we made our appearance. Humans have been around in this form for perhaps 200,000 years. As a fraction of Earth time (and if you round down) we aren’t even here. I believe our tenure is limited. When we are no longer the Earth will quickly heal … it will have survived.